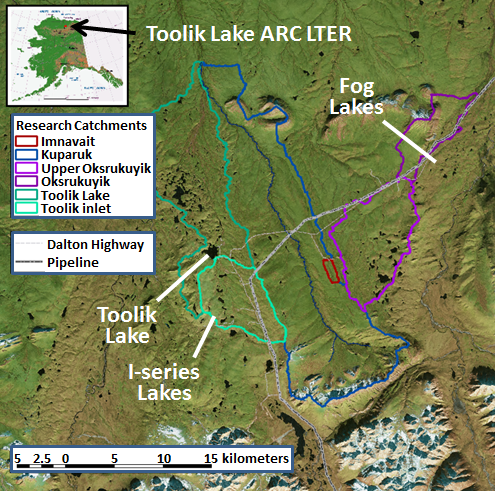 by the National Science Foundation to support long-term ecological research in the United States. Our research site is located in the foothills region of the Brooks Range, North Slope of Alaska (68° 38'N 149° 36.4'W elevation 720 m) and is based out of the University of Alaska's Toolik Field Station. The project is based year-round institute at The Ecosystems Center, Marine Biological Laboratory, Woods Hole, Massachusetts.  The Principal Investigator of the Arctic LTER is Ed Rastetter while Breck Bowden, Laura Gough, Phaedra Budy, George Kling, Gus Shaver, Anne Giblin and Byron Crump form an executive committee and direct the four main components of the research including groups focused on tundra, streams, lakes, and landscape interactions. Project History: Research at Toolik Lake began in 1975, and the site became part of the LTER Network in 1987.  The overall aim of the ARC-LTER has been to develop a landscape understanding of ecological functioning based on the interactions among tundra, stream, and lake ecosystems near Toolik Lake, Alaska.  The specific focus evolves continuously and changes with each renewal cycle, as understanding has grown and as new opportunities and questions are recognized:

The objectives of the Arctic Long-Term Ecological Research (LTER) Project for 2017-2023: 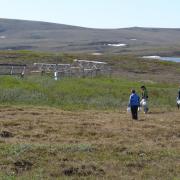 The Arctic is one of the most rapidly warming regions on Earth.  Responses to this warming involve acceleration of processes common to other ecosystems around the world (e.g., shifts in plant community composition) and changes to processes unique to the Arctic (e.g., carbon loss from permafrost thaw).   Our objectives in the coming years are to use the concepts of biogeochemical and community “openness” and “connectivity” to understand the responses of arctic terrestrial and freshwater ecosystems to climate change and disturbance.  These objectives will be met through continued long-term monitoring of changes in undisturbed terrestrial, stream, and lake ecosystems in the vicinity of Toolik Lake, Alaska, observations of the recovery of these ecosystems from natural and imposed disturbances, maintenance of existing long-term experiments, and initiation of new experimental manipulations.  Based on these data, carbon and nutrient budgets and indices of species composition will be compiled for each component of the arctic landscape to compare the biogeochemistry and community dynamics of each ecosystem in relation to their responses to climate change and disturbance and to the propagation of those responses across the landscape. (2016 proposal) The Arctic LTER research also addresses an important societal goal: the prediction of response of arctic ecosystems to environmental change, both natural and anthropogenic.  The data and insights gained are provided to federal, Alaska state and North Slope Borough officials who regulate the lands on the North Slope.